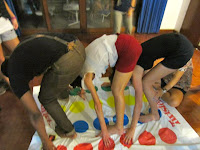 For most Americans and myself, Turkey Day is normally made up of family, friends, food, football, napping, a game where we end up ticked off at each other, and then more food. That’s great and I missed my family and friends back home terribly this Thanksgiving, but when life hands you raw fish you make sushi!


Over the past three months, several ATI group members from the course in Phuket stayed in close contact via Facebook and email since we are dispersed all over the country of Thailand. A solid crew met at my friend Jess’ apartment in Bangkok to celebrate Thanksgiving American style. Our potluck dinner consisted of the most random array of foods in one sitting most of us had ever had before. I promised real macaroni and cheese to the group (not the cheap stuff), so I had to fulfill my obligation in order to complete the feast. Most wouldn’t think twice about mac ‘n cheese but in Thailand it’s a delicacy. It took two hours to find a block of cheese and pasta in Bangkok! The dish was a huge hit so I am glad I spent nearly $20 (which is a steep price for me these days) and combed the city for 2 hours to bring everybody a little bit of ‘Merica for the holiday.

Jess’ roommate introduced the party to a game, which was a combination of rock paper scissors, a train dance, and Thai trash talk rolled into one. Each participant starts with a partner and says a few Thai phrases accompanied with easy body motions and serious attitude, then you have a mini rock paper scissors game and the loser attaches themselves to the back of their former opponent like you are lining up for the train. Two new competitors repeat the scenario and the game continues until all the partakers are snaked around the room in a line dance.


The game was a nice appetizer for the cornucopia of food that followed. During the meal in typical Jack Handy fashion, I announced I was thankful for meeting all of these amazing people and for such an incredible adventure in Thailand then asked everyone to follow suite. You can’t have a Thanksgiving dinner without the “what are you thankful for’s” and I always pull this move back home in America for dinner with my family so it had to be done. The flat was filled with grateful Americans as well as Thais who celebrated their first Thanksgiving. After we filled our bellies with the delicious assortment of grub prepared by everyone, we cleared the living room furniture created an 8th grade house party with a competitive game of Twister followed by a lights out dance session.