It’s an inevitable ordeal; every time I go overseas for an extended amount of time the scale leans much farther to the right than normal. Like I’ve said before, I’m a foodie (non douche bag kind) and part of experiencing different cultures is tasting all the glorious food! Gaining a few lbs. here and there during your time abroad is pretty normal and shouldn’t be dwelled upon. Just know that if you’re shopping and want to try something on, the teensy Asian girl behind the counter won’t hesitate to tell you that you’ll bust the seams open if you even look twice at that dress that’s caught your eye. Co-workers and strangers will not falter to tell you where you’ve gained a pound or two.
Don’t let their bluntness offend you; brutal honesty is part of their culture unlike in America where the topic would be danced around like an elephant in the room. So SUCK IT UP! 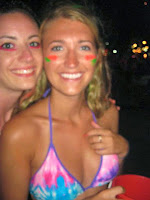 But did you ever think of the other ways our body image could haunt you while visiting other countries? Even the most confident folks can be self conscious at times when someone is actually telling your face what’s wrong with you. Its one thing to gain and shed a couple of pounds but what if you can’t change something about yourself that’s socially unacceptable?

Westerners tend to love tanned skin. A bronzed glow represents health, relaxation and even prosperity.  To spend a day poolside and not working shows you have time and money to relax or take a vacation. In Asia, every body and their mom wants to have creamy white skin and for some people that’s just not going to happen. But being as white as a glass of milk does a body good. To them, it’s the poor laborers who must bake in the sun all day while working in the fields. Those citizens in the rare air-conditioned offices and out of the SE Asian scorching sun tend to make higher salaries and therefore are part of a higher societal class.
As a result, all skin products in Asia contain a dreadful whitening agent. Shopping for face wash or a stick of antiperspirant was a huge burden for me. Not only do regular sticks of deodorant not exist, but there are whitening agents in face wash, lotion, deodorant and even makeup! Rows upon aisles of well-known brands in America with an eastern twist occupy the shelves. I do not want to scrub my blackheads and blanch my skin simultaneously, but thank you for asking.
Surprisingly, bleaching chemicals in skin products aren’t extreme enough for some people. Sunscreen and umbrellas are amateur for Chinese beach goers.  The citizens have taken a day at the beach and turned it into a scene from a bank robbery with the newest fashion called “face-kini’s.” That’s right, people have resorted to swimsuits for their face to prevent the sun’s UV rays from turning their natural skin pigment a shade darker. SPF 100, a hat, and umbrella are just not going to cut it on the Chinese coast this summer. Perhaps this is why they’ve never created an Asian style Baywatch show. Here’s an idea, why not stay out of the sun? I guess they’d have to develop an artificial way to absorb Vitamin D.
All in all, your body image is perceived differently in different cultures. That’s why they made chocolate and vanilla. Perceptions of beauty are in the eye of the beholder.  I say let’s just forget about the beholder and stick to what counts on the inside! In Asia where your outside appearance is almost as important as what’s on the inside, it’s difficult to not allow your emotions to get entangled with the sometimes hurtful honesty from your new friends and those surrounding you. Just be yourself and please don’t ever let me catch you with a face-kini.