Leo Dicaprio’s Ko Phi Phi Island – Monkeys and much more on my face! 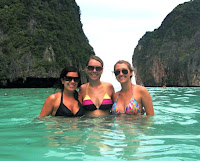 Ok I’m going to shoot it to you straight about Ko Phi Phi (pronounced pee-pee). Ko Phi Phi is an island about an hour (by speedboat) from Phuket and it’s one of the most beautiful places in the world. This statement is not just my opinion, it’s widely known by travelers who have seen the worlds’ most beautiful natural treasures. Have you ever seen The Beach with Leo Dicaprio? Yea, enough said.
Ko Phi Phi (it’s so fun to say) is part of the Marine National Park, which includes two islands usually just referred to as Ko Phi Phi. KPP Don is the larger of the two islands where all the shopping, restaurants, hotels, bungalows and tourists congregate. KPP Ley is a significantly smaller island with beautiful coves and beaches. There is no place to stay on Ley; it’s strictly to enjoy for its gorgeousness. On Saturday, our fearless and hilarious leader Gabe organized an excursion for whoever wanted to take a day trip out to the islands. The popularity of this outing has spread like wildfire and the tour companies are packed nearly everyday. You can book a trip directly with a tour guide company or through your hotel. A large group of ATI kids boarded the Sea Angel speedboat Saturday morning along with several other passengers that could squeeze aboard the ferry. During the hour ride through the Andaman Sea, we passed giant stone cliffs that were covered with lush greens and looked as if they had been strategically placed to serve as stepping-stones leading from one island to the next. 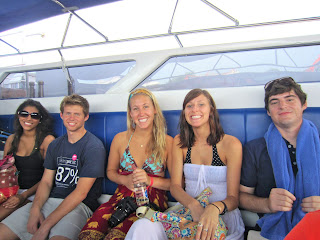 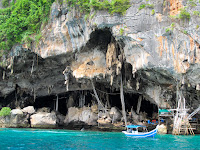 Our first stop was the Viking Cave on KPP Ley. You can’t disembark the boat but they pull right up to give passengers a good looksee. Apparently it is a small cave where explorers found writing or pictures from Vikings a long time ago. Our tour guide, a young feisty Thai lady, said something about “bird shit” covering most of the pictures nowadays. I really couldn’t understand her and after she said “burd chtit” I decided I’m probably going to have to fill in a lot of blanks today. We carried on to Pileh Cove which had the most clear, turquoise blue water dotted with brown long tail boats covered in bright, colorful leis. We finally made it to Maya Bay where The Beach was filmed. This place is absolutely gorgeous but it was more than overpopulated with tourists and made me so sad. We literally had to squeeze the boat in between two others just to anchor down. The beach is not very big at all and with the copious amounts of people on it I could not even find a place to enter the water. I cannot imagine what it will look like in ten years, most likely polluted and completely run down from the constant traffic of bodies and boats. 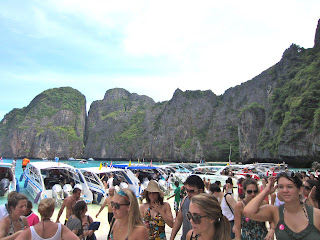 After a while, we stopped at monkey beach to feed some “wild monkeys.” These monkeys are around so many tourists each day they take the food right out of your hand and my are they picky! Handing them a piece of bread is like giving royalty a pop tart. The baby monkey was pretty cute though. 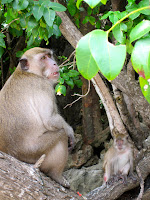 We moved to an area for snorkeling, which is the real clincher for these day trip tours. The area was badly depleted from the constant shuffle of loading and unloading people and boats. The coral was bare and the wildlife had definitely scattered to a more abundant place. In a way its good that these tour companies have limited their dive spots to a small specific area. Hopefully I’ll be able to get some good diving in before I head up north because I know there are some beautiful spots. On the main KPP island, we had a lovely lunch and then only a few minutes to check out the town before you are shuffled back on the boat for the last stop. A few people in the group decided to unload and stay on the island for the night and make their way back in the morning. Several of us decided to come back after our course and stay a day or two and really enjoy the island since there is so much we didn’t get to see on our super rushed tour. I recommend going to Phi Phi but not doing a tour because it’s much nicer to plan your own excursions; therefore you focus your attention on spots you want to spend more time in. I enjoyed the tour because all my friends went but I definitely plan on going back again on my own! 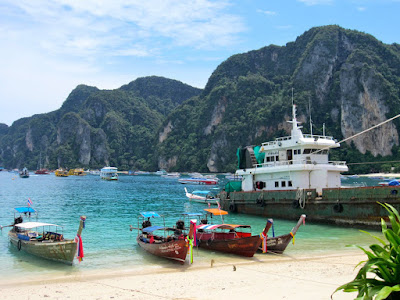