Teaching Practice Week with “Teacher A” in the House 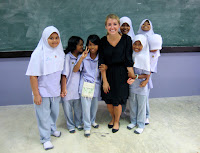 After two weeks of repetitive classroom training with ATI, the TESOL trainees set out to various schools in Phuket for a week of teaching practice with real students and creating our own lesson plans.  The 38 of us broke into groups of 6 or 7 and gave one thirty-minute lesson everyday to different age groups with a different observer.  The first 3 days we went to a school about an hour from Nai Harn.
In my first class, I only had 4 girls that were probably 6-years-old.  I was the last to teach which meant by the time 3pm rolled around they were sick of English and exhausted with white people talking and not understanding.  I cannot tell you how nervous I was; this was my first time in front of a classroom to teach.  The girls were angels for me though; they participated and learned farm animals (how exciting) very well.  They even told one of the Thai observers that I was their favorite teacher!  As the week went on, teaching became more natural and I felt progressively more comfortable in front of the class. Critiquing our peers also helped because it gave us ideas of what games and activities do and don’t work with students. 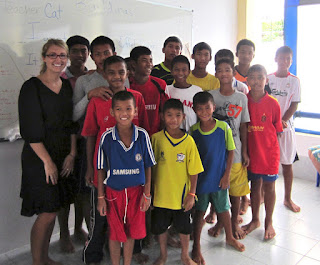 On the fourth day of teaching practice, a few of us went to Football Youth Home.  Football Youth is an orphanage for boys where they recruit hard working soccer players and give them a safe place to live, eat, study, and play soccer everyday.  Some of the boys have had the opportunity to travel all over the world playing in matches and have barely reached age 15!  The guys were good students but of course it did get a little rowdy when you have a class of boys ages 10-17 and you’re trying to teach them all the same lesson.  Their language level is different but they did a great job and respected me when I laid down the law.  The boys’ sense of camaraderie really touched me because even though they were competitive during the learning activities, they also helped one another when someone didn’t understand.  The older boys guided the younger kids like real big brothers.  Football Youth is an amazing organization and if you want to learn more about how to help them please visit their website at http://home.exetel.com.au/katjahouse/Thailand_html/index.html.  They do not accept any money, only donations because they don’t want the home to operate for profit and become corrupt.  Spending the day with the boys was an amazing experience and I hope I brought some value to their lives during our short visit.


The final day of teaching practice was a trip to a juvenile detention center.  I had another classroom of all boys ages 15-18.   Luckily for me, the boys listened to me and participated in my lesson pretty well.  Their language level is fairly high and I wrote a dialogue for them to say in front of the class with some of the words that they learned earlier in my lesson.  My observer from the previous day told me, “When you call on someone to participate and they don’t want to, don’t give up on them so easily.  Tell them you come up here and start clapping and encouraging them to come to the front.”  So I put that information in my back pocket and brought it to the classroom at juvy.  I called on two boys to come to the front of the class and say the conversation aloud to everyone.  One boy obeyed and came to the front while the other boys were laughing at the second student I called on.  I thought maybe they were making fun because he didn’t want to participate and I was on him like white on rice.  With the tid-bit from yesterday’s lesson, I wasn’t letting him off the hook that easy.  I kept clapping and saying, “You can do it, come on!”  When he finally got up (this went on for a minute or so), he came to the front of the class and I realized why he didn’t want to get up.  He was already “up” so I made him sit down immediately.  The awkwardness of puberty in the classroom.  I had to finish the lesson without laughing but thankfully I’m teaching at an all girls’ high school in the future.  Teaching practice was a great part of my training and I feel 100% more comfortable in front of a classroom now.