Wai Not? The Dawg and the Monk 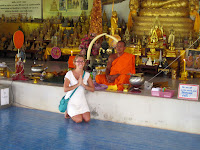 The first two days of my course in Thailand consisted of a tiny Thai woman nick-named Pat who forced me to sing children’s songs in Thai and practice bowing to the king.  It was actually really fun and Pat (Thai people go by their nickname so I will go by “Teacher Dawg” in class and it will be completely appropriate) made the sessions very enjoyable and useful.  To “wai” in Thai is a form of greeting like shaking someone’s hand or saying “Hello, nice to meet you.”  And if you think there’s only one way to wai, you’re wrong.
There are several different ways to wai and you must wai a certain way to different statuses of people.  It’s exhausting! Don’t even get me started on the way to show respect to a monk, it takes about ten minutes.  I’ll give you a quick recap: when you wai, you put your hands in prayer position and depending on who you’re waiing your hands should be pressed against your face at a certain level.  Another way to show respect is if an elder passes by or you pass them, you must wai (at the correct face level of course) and then make yourself shorter than them by bending down or almost bowing.  If you pass an elder when they are sitting down, you have to walk past them on your knees.  I’m not joking!

One morning before class I was about to start my morning jog and I see a monk up ahead.  I started racking my brain for the way to bow and if I needed to even get on my knees and all the steps I needed to take and I got so nervous I just diverted and sat by the beach.  I sat for a few minutes hoping he’d walk by and I could avoid the whole situation.  After a while, I decided to get up and just walk the way I came, but as I started up the street here he comes trailing me and hauling ass too.  The monk has this hackling cough and I can feel him gaining on me.  As he approached on my lefty, I had no time to think and just waied to the best of my ability.  Luckily, he looked at me with a huge smile and said “Iz ah-k, iz ah-k.”  Thank Buddha!  I’m sure they don’t expect the farang (foreigners as we’re called) to know the etiquette, but if I’m living amongst the Thais for some time I want to be respectful. 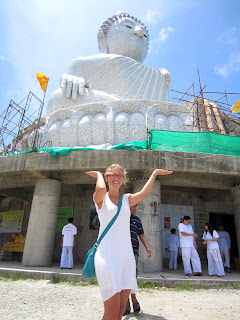 I really got a chance to redeem myself when I went to the Big Buddha in Phuket last weekend.  The Big Buddha is an enormous marble statue of a sitting Buddha on the highest hill in Phuket. You can see it from nearly the entire island! The view from the top is gorgeous, the turquoise water is ever present from the high view and it’s more than enough to take your breath away.  At the base of the Buddha is a temple where a monk will bless you and give you a bracelet for peace and good luck.  This time he gave me a “thumbs up” so I felt pretty good about myself after my wai.  When in doubt just wai, and wai the hell out of it. 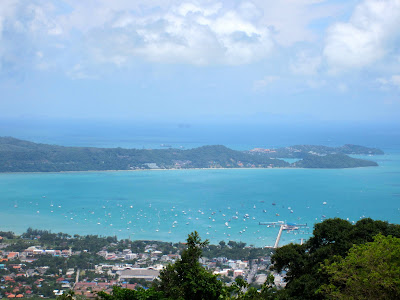