Korean BBQ - Fondue at its Finest 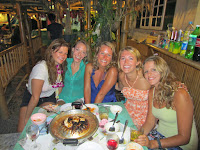 Have you ever been to a fondue restaurant in the states called the Melting Pot? Well for those who have not, it is a clever place where you and your table choose seafood, meat, and veggies and cook them right at your own table to suit your liking! To commemorate our TESOL (Teaching English to Speakers of Other Languages) certification, the group went to eat at a Korean barbeque restaurant for a celebratory dinner.
A Korean BBQ is like dinner at the Melting Pot restaurant where you choose and cook your own cuisine but in Thailand, which means there are some weird quirks hidden in every corner. Naturally you are eating outside because like all places in Thailand, you are outdoors with no air conditioning. Each table is different: either you are sitting on tree stumps surrounding a short table that is no more than two feet off the ground or you sit in a little bamboo hut on bamboo benches. At the table, a man brings over a metal bowl with steaming hot coals inside of the bowl and places it right in the middle of your table on a large tile. If you weren’t sweating already (impossible), now it’s like you have a bon-fire directly in front of your face! Water is poured on the outer ridges of the bowl and the top portion is shaped like a dome. The boiled water is the area to cook your veggies and noodles. The dome area is to cook meat and seafood. Once your bowl is heated up really hot, everyone makes their way to the buffet zone where you pick any type of meat, fish, veggie, noodle, and condiment your little heart desires. Raw squid, chicken, bacon, crab, fish, pork, several different kinds of noodles, broccoli, cauliflower, mushrooms, corn and tons more food that I didn’t even know are laid out in metal pans on a large table for you to choose. You just load your petite plate with an assortment of raw goodness that looks edible and start cooking away at your fire pit. Make sure to bring an extra clean plate for your cooked food. One thing that concerned me a bit was directly under the buffet table were bunny rabbit cages with live rabbits in them. They were just hanging out underneath the food.

This is one of the quirky things that would never happen in America but in Thailand it’s perfectly kosher to have live animals directly underneath the non-live animals. Really makes you wonder what some of those unidentified raw items were, huh? It became every man for himself when the cooking commenced. The small area was not nearly big enough for all your food selections or even half. Each guest cooked a few pieces of his or her food at a time and eventually everyone’s food got mixed up. I made a huge no-no when I stuffed my mouth with what I thought was a piece of white fish, but quickly spit it out because it just didn’t seem right and I eat pretty much everything. Later at the buffet table (round 2) I told my Thai friend that I didn’t like whatever “that” was and pointed to the “white fish.” She cracked up and told me I wasn’t supposed to eat the LARD that gives the rest of the food flavor. Gross me out Sally. Thankfully I didn’t swallow it. Overall the food was awesome, bunny rabbit or not and no one got sick. Shocking, I know. I think I’ll go to a Korean BBQ again, but next time in Korea. 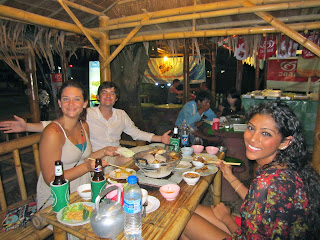