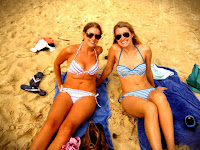 Leaving Nai Harn proved to be a pretty easy transition considering 14 of us were headed to the beautiful island of Koh Samui. Chem, our beloved tuk-tuk driver for the 3 weeks while we stayed in Phuket, happily offered for he and his brother to drive the herd four hours by minibus (so we thought) to Don Sak pier. Here we boarded a ferry headed to Samui. When Chem showed up at 7AM we had one minibus and Chem’s Thai sized SUV with a massive stereo system that took up the entire luggage area.
Four passengers plus Chem piled into the car with our packs at our feet and drove with Thai music vibrations pounding our bodies most of the way. That was fun. Most tourists take a tuk-tuk from their hotel to the public bus station, then a bus to Surat Thani (a small town near the pier) then another tuk-tuk to Don Sak pier. Fortunately for the flock, we had the hook up with Chem who brought us directly from our hotel to the pier because we proved to be such loyal customers in Phuket. The Raja Ferry brought us about an hour and a half through calm turquoise blue water to the island of Koh Samui.
Once we arrived, everyone formed small groups and diverted in different directions to find accommodation. The Penzy Guesthouse in Chaweng beach ended up being a one-night home for me, Michele, Kelly and Matt. Penzy, the manager and her Massachusettsian husband gave us a 100 baht discount on the room price because she had been to Pensacola and I mentioned to her I went to the annual Blue Angels show this summer and two of our guests are from Massachusetts. Lucky us! We headed to the picturesque beach, which looks exactly like a scene on one of those “OMG I want to go there someday” paradise calendars. White sand, mountains in the distance, and crystal clear water. Thai ladies have tents set up along the beach where you can get a massage for “cheap cheap,” as they say to entice foreigners. For 250 baht (about 8 USD), I received a full body hour-long massage right on the beach. You can’t pass that up! Only me, Matt, Kelly and Kait decided to go out on the town and check out the scene which was unfortunate because we only spent one night in Samui on route to Koh Phangan. I set out to meet up with my fellow partygoers and walked down the main drag on Chaweng beach. I discovered tons of seafood restaurants, souvenir shops, and apparently since I was drinking a Chang every Thai person and their mom wanted to talk to me. I walked for about thirty minutes to get to the action and of course it started raining. I finally found my friends sitting on a stoop to escape the rain, drinking a bottle of Hong Thong. Always a great start to any night. Or at least a good story… We finally decided to suck it up and walk through the rain and stopped to have a drink at Bondi Australian bar.
We didn’t make any friends. Possibly because we were soaking wet, which was a really cute look for us, or maybe our American accents turned some people off. We moved on our merry way down the street to a strip of bars and clubs nestled on a side street off the main drag. Soi (street) Green Mango also called Green Mango Square is a horseshoe shaped area crawling with bars, clubs, and pubs beckoning to be visited by tourist and locals. Go-Go girls and Lady Boys stand in the pedestrian street and entice passer-by’s to occupy their dance floors and bar stools for the night. I spent most of my time in Green Mango Club that had a huge dance floor, a massive stage, and huge projector screens playing music videos and Muay Thai boxing fights. It was extremely dark but there were funky multicolored lights shaped like jellyfish hanging above the dance floor. There is no shortage of a good time in this area, plenty of people, music, drinks and dancing.

There were so many people and so much action going on we eventually all lost each other. After an adventurous night and losing all of my friends I decided to head home by a lovely motorbike taxi man. The following day was pure R&R on the gorgeous shoreline, where I drank a coconut shake in a young coconut and did absolutely nothing. I wanted to explore the island more, but we were headed out to catch the evening ferry to Koh Phangan for the Full Moon Party…